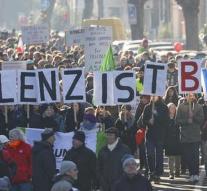 koblenz - Activists of civil rights movement Avaaz have campaigned Saturday at a meeting of populist European politicians in the German city of Koblenz. The protesters placed life-size portraits of well-known fascists such as Hitler and Mussolini.

Political leaders like PVV leader Geert Wilders, Marine Le Pen of the French National Front and Frauke Petry Alternative for Germany to attend the Saturday congress of the Europe of Nations group and Liberty (ENF) from the European Parliament. In total, about a thousand participants are present.

Even demonstrators and agents abound at the meeting. So blocked by the police about forty seated protesters several entrances to the convention center. Later, also planned a demonstration in the city.

Wilders tweeted a picture of him smiling poses with his colleagues Le Pen and Petry. 'Proud to be here with the leaders of the new Europe,' he wrote in English.