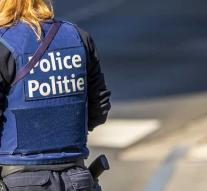 aken - The Aachen police have prohibited environmentalists from demonstrating Saturday in and around the Hambach forest, which will be largely cleared for lignite mining. 'The responsible local authorities see significant dangers to public safety,' was the statement issued on Thursday evening.

The place where the demonstrators wanted to collect, changed constantly over the past few days because none of the landowners wanted to give permission for the use of his or her terrain. The energy company RWE, which owns the hectares of forest where the brown coal will be mined, refused to cooperate. 'As a result, the necessary safety plan could not be made in time,' according to the Aachen police.

The environmentalists who save the demonstration 'Forest! Stop cabbage! 'The court can challenge the decision. The German federation for nature and environmental protection BUND announced that it would do so in the evening.

'We will oppose this disconcerting restriction of our demonstration right,' said spokesman Dirk Jansen. 'This is purely about driving peaceful, non-violent protest. We are certain that on Saturday thousands of people will come to demonstrate peacefully. A whole caravan is already preparing to go to the Hambacher forest. '