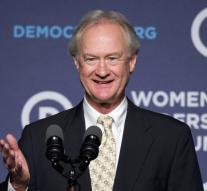 - Lincoln Chafee has withdrawn from the race for the Democratic nomination for the presidential elections in the US The former governor of the US state of Rhode Island was one of five Democrats vying for the candidacy.

Of them Hillary Clinton, the biggest favorite. Chafee dangled in the polls below. He made Friday during a speech to a women's forum of the Democrats announced that he is retiring. Besides Clinton Sen. Bernie Sanders, former Senator James Webb and former Governor Martin O'Malley left.