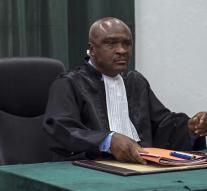 paramaribo - The Surinamese Public Prosecutor's Office has called for Susan Steven Dendoe on Friday for twenty years. There would be 'legitimate and convincing evidence' of Dendoe's involvement in the December killings.

Dendoe denies all involvement in the murders of fifteen opponents of the then military regime. He stated on 8 and 9 December 1982 that he had been visiting family in the east of the country. Several witnesses oppose this: they have actually seen Dendoe in Fort Zeelandia, where the murders were committed.