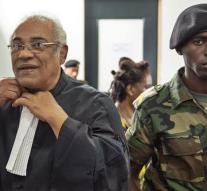 paramaribo - The Public Prosecutor's Office (OM) is expected to be able to pronounce the requisitoir and the penalty in the December murder case for which the Surinamese president Desi Bouterse is in trial. The Surinamese war council has set the case before Wednesday afternoon.

The trial against chief suspect Bouterse and others stopped since February after the OM attempted to terminate the prosecution process. Continuation would endanger state security, the prosecutor found. The Surinamese Court of Justice resigned and referred the matter back to the ward council.

It is not certain whether the OM, in the person of the auditor-military, will pronounce his appointment and demand on Wednesday. He is not obliged to do so. This is not a problem for the ward council. The board can also make a statement without the motivation of the OM.

The trial is about the killings of fifteen leading Surinamese and opponents of the then military regime of Desi Bouterse, committed on December 8, 1982.