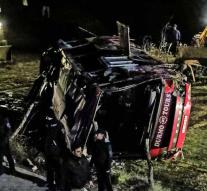 skopje - Because of a bus accident in Northern Macedonia, at least 14 people were killed and 30 others were injured. The accident was on the highway between the capital Skopje and Tetovo.

The bus with 51 passengers slipped, landed on the opposite side of the road and tipped over. The cause is unknown. The driver of the bus survived the accident at the end of Wednesday afternoon and was taken by the police for questioning.

The North Macedonian government announced two days of national mourning. Also, festivities for Thursday have been canceled. The country would celebrate the feast of the patron saint of winemakers.