Home / World / Dead and wounded by attack at parade Iran 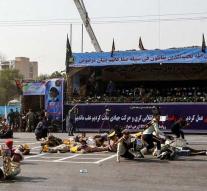 teheran - At least eleven people were killed when gunmen opened fire during a military parade in the Iranian city of Ahvaz. Dozens of people were also injured, reports Iranian media.

The authorities speak of at least four attackers, of whom two have been killed. Video images show chaotic states. Men in military uniforms lie on the ground while bullets fly through the air. Citizens try to bring themselves to safety in the meantime.

Attackers would have shot at both soldiers and civilians. Several victims would be members of the Revolutionary Guard, an elite corps separate from the regular armed forces. According to some reports, a stage where Iranian officials had gathered was the target.

The responsibility for the attack has not yet been claimed. A spokesman for the Revolutionary Guard pointed out an accusatory finger to extremists supported by Saudi Arabia, the great rival of Shiite Iran.

Iranian Foreign Minister Mohammad Javad Zarif promised that his country would respond 'quickly and decisively' to defend Iranian lives. He called the perpetrators on Twitter 'terrorists who have been recruited, trained and armed by a foreign regime. '

Similar military parades are held on Saturday in several Iranian cities. This pays attention to the beginning of the Iraqi-Iranian War in 1980. That bloody conflict lasted eight years.