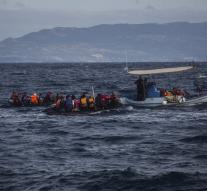 samos - Certainly eleven refugees, including six children, were killed early Sunday when their boat capsized off the coast of the Greek island of Samos. Fifteen passengers were saved.

Most victims have drowned in the boat itself, Ekathimerini said. They failed to get out of the flooded cabin, said an employee of the Coast Guard in the Greek newspaper.