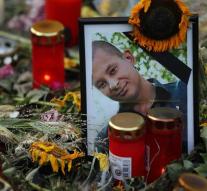 amsterdam - Yousif Ibrahim A., a 22-year-old asylum seeker from Iraq, is one of the perpetrators of the stabbing in Chemnitz who, in the night from Saturday to Sunday, took the death of Daniel H. The asylum seeker would have known to the German examining magistrate that he had stabbed the victim five times in his chest. Yousif A. is kept in custody with a friend Alaa S. because of the murder.

According to the German newspaper Bild, Yousif A. has previously come into contact with the law. Last year he was sentenced to eight months in prison and two years suspended because of a mishandling with serious injuries as a result. He would also have been arrested several times for drug possession, fraudulent practices and serious traffic violations.

Yousif A. arrived in Germany in 2015. His asylum application was rejected a year later, but he appealed against his deportation and was tolerated ever since. He would have passed the German language exam and wanted to work as a hairdresser again, a profession he also practiced in Iraq.

After the murder in Chemnitz, riots arose, with right-wing extremist groups engaging behind migrants.