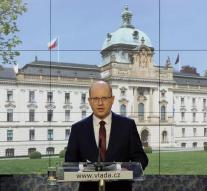 prague - The Czech Prime Minister Bohuslav Sobotka has returned to his resignation on Friday. Instead, he wants to fack finance minister Andrej Babis, his main political rival, to put an end to a conflict in his center-linked government.

The Social Democrat Prime Minister announced his surprising resignation on Tuesday, less than six months before the parliamentary elections. The cause of the conflict are the allegations of tax fraud at Babis, leader of the liberal-popular coalition partner ANO.

Sobotka said on television that he was trying to create a way out of the political crisis. The Czechs will go to the polls on 20 and 21 October to divide seats in the new House of Representatives.