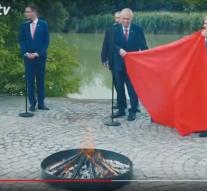 prague - The Czech president Milos Zeman surprised friend and foe Thursday by burning a big red underpants in front of the cameras. He threw the colossal boxers in the garden of the presidential palace demonstratively into a campfire.

The 73-year-old head of state responded to an action by the critical group of artists Ztohoven almost three years ago. At the time, he hoisted a red giant slip high in a flagpole on the Prague Castle and said it was a suitable banner for a man who really is not ashamed of anything. The perpetrators received a conditional sentence for vandalism.

Zeman's late revenge was remarkable. The theme of his press conference was not announced. That led to wild speculation. At the betting offices it was gambled that Zeman would announce his resignation, give someone amnesty or reveal his holiday plans for the summer. No one had bet on a trouser burn.

'I think the time is now over to hang out the dirty laundry in politics', Zeman said competingly to his opponents. He received a second term for five years in January as president.