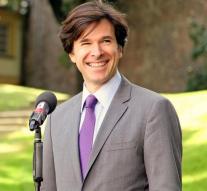 prague - Czech President Milos Zeman has criticized the US ambassador to his country in little diplomatic terms. He called it hypocritical,, '' Ambassador Andrew Schapiro to support the fight against corruption in the Czech newspaper Pravo wrote Monday.,, One can see it as a form of corruption being rewarded an election sponsor with an ambassador post, '' he said.

Diplomatic Posts in friendly countries are often given in the US to individuals who have contributed much to election campaigns. Schapiro, originally not a diplomat but a lawyer, was appointed by President Barack Obama in Prague in 2014. Zeman has long annoyed him. Last year, the ambassador mentioned it in connection with the annexation of the Crimea questionable that Zeman the end of the Second World War commemorated in Moscow.

Czech Republic takes on the corruption index of Transparency International, the 37th place, below Botswana and Portugal, but above Greece and Hungary. The Czech President has mainly representative duties and only in foreign policy participation.