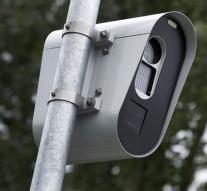 prague - The chief executive of the Czech police by colleagues when he flashed his official car speed limit exceeded in Ostrava. The 44-year-old Tomas Tuhý expressed its willingness to cooperate fully and like any citizen to accept the consequences.

How Tuhý was driving too fast, he did not give up. Record Holder,, '' according to the police was a judge of the Constitutional Court, who was driving in the urban area 96 kilometers per hour. Because immunity is, however, that there is no punishment from it.