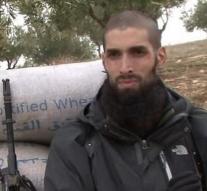 raqqa - The Dutch jihadist Yahya Salih Gazali Yilmaz (28) may be slain by an airstrike in Syria. Yilmaz became known as the 'salon-jihadist' who was in the picture was with kittens and newborn babies and ten thousand marriage proposals. He gave an interview on Dutch television.

The Daily Mail reports that Yilmaz was killed in IS capital Raqqa. A spokesman for the National Coordinator for Terrorism and Security (NCTV) can not confirm the death of Yilmaz.

In a television interview, he said he missed his mother. He also missed the 'salon', the typical Dutch fat snack chips, kebab and cheese. He did not think he would ever come back alive in the Netherlands. He also said that gay people should be executed by throwing them off a high building. He also defended the terrorist attacks in Paris. He is on the terror list.


He was regarded by his symapthieke look like a woman magnet. Inter alia, the Maastricht jihad bride Aïcha would be left hoping to marry him to Syria.

Yilmaz served in the Turkish and the Dutch army. He joined in 2013 the resistance against Syrian dictator Bashar al-Assad. Last year he joined IS up, where he trained include British rebels.