Home / World / Crowd Fund for refugees over one million 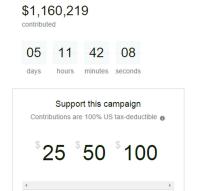 - The American crowd fund action to collect money for refugees in the Middle East, the boundary of one million dollars passed.

In less than three days managed to collect 18,000 men over 1.1 million dollars, while the first goal was 735 000 dollars. According to Kickstart of the applied cash 5,000 people helped worden. The action is unique because it was initiated by Kickstarter itself, while the company normally does not interfere with the content of the measures on its website . Kickstarter works with the UNHCR, the refugee commission of the United Nations.