Home / World / Criticism of the Swiss army due to declarations 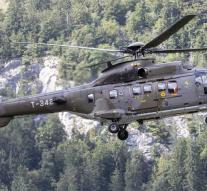 zurich - Spouses who fly helicopters to a dinner, expensive gold coins as gifts, drinking parties at the expense of the state: the Swiss army gets a lot of criticism because of excessive expense reports. As the Swiss newspaper Tages-Anzeiger said on Monday, in recent years several dinners were accompanied by a lot of wine and drinks.

The Swiss armed forces have meanwhile said that a new directive is already in force after an internal evaluation of the incidents, with the aim of launching a 'cultural change in the treatment of expenditures'. Therefore, family members should no longer be invited at the expense of the state and alcohol should only be served within reasonable limits.