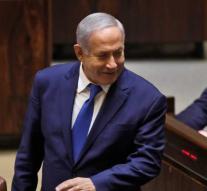 brussels - The European Union has sharply criticized the decision of the Israeli government to approve the construction of more than two thousand new houses for settlers on the occupied West Bank...

Israel conquered the West Bank and East Jerusalem in 1967 during the Six Day War. Today, more than 600,000 settlers live in two hundred settlements.

The Palestinians want to establish an independent state in the area. In 2016, the UN Security Council demanded a full settlement in the occupied territories of Israel.