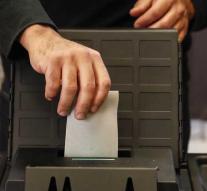 brussels - Belgians cast their vote on Sunday in municipal and provincial elections. They are the first polls since 2014 and are seen as an important indicator for the parliamentary elections in May next year. Approximately 8.2 million Belgians can vote for municipal councils and in Flanders and Wallonia also for provincial councils.

The ballot box runs smoothly apart from small incidents. In Brussels, especially in Uccle and Voorst, there were long technical problems in almost fifty polling stations on Sunday, so that they did not open in time, the Belga news agency reported. This is difficult locally because polling stations close relatively early and are nowhere longer than 16.00 hours open.

The 'green' party Ecolo (Ecologistes Confédérés pour l'Organization des Lutes Originales) has indicated that it is likely to be the target of a cyber attack. The internet sites of the municipal departments are suddenly no longer available. A summoned employee of the polling station dressed as a clown appeared in Maasmechelen. He was sent home.

Foreigners who have been living legally in Belgium for at least five years may also vote. According to Flemish broadcaster VRT, almost 18,000 refugees and immigrants from outside the EU have registered, including refugees from Syria and Sudan.

In Flanders, the results of the center-right Flemish Nationalist N-VA (New Flemish Alliance) and of the Christian Democratic CD \u0026 amp; V (Christian Democratic and Flemish) are being looked at with great excitement. The N-VA has long been a leader in cities, but beyond that, CD \u0026 amp; V still dominates. The N-VA hopes Sunday to put a point behind the dominant role of the Christian-Democratic people's party.