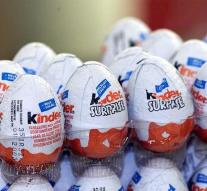 milan - The man who the famous Kinder surprise egg is deceased devised. William Salice died Thursday at the age of 83 in Italy.

It reports the French newspaper Le Parisien. Salice worked for the Italian chocolate maker Ferrero. The Kinder Surprise egg, a chocolate egg with a surprise in it, which is on the market since 1972 has been one of its most successful products for the company.

Of the amount he was given by his employer in 2007 when he retired, Salice the Color Your Life Foundation founded. The foundation helps young people to develop their talents.