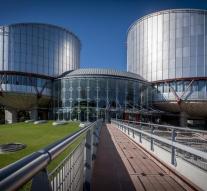 bremen - The European Court of Human Rights has stopped the expulsion by Germany of a man who is considered to be terrorist at the last moment. The 18-year-old man from Dagestan was already on the way to Frankfurt airport when the verdict came to the German authorities. The vehicle with the man turned over.

The man was supposed to be an Islamic state terrorist movement and could be considered by German authorities to attack German soil. The German constitutional court had given permission for his expulsion to his homeland. The man had been stuck since March to resign and brought the case to court.

The verdict is a preliminary. A final judgment is expected in the coming months, according to the State Department of the State of Bremen.