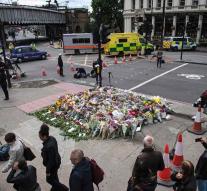 dublin - One of the three terrorists who killed seven people on Saturday in London and injured dozens of people in the past had in vain asked for asylum in the United Kingdom. Yet he could settle there thanks to a residence permit issued by the European Union, provided in Ireland. That has been announced by the Irish channel RTE on Tuesday.

It is about the thirty-year-old Rachid Redouane, who lived in London Barking, and died in the attack. He would have a Moroccan and Libyan background. Several Irish media reported that an Irish identity card was found on his body. Irish Prime Minister Enda Kenny confirmed that one of the attackers had stayed for a while in Ireland, but did not draw the attention of the authorities.

According to RTE, Redouane married in Ireland in 2012 and was thus in possession of the so-called 4 EUFam Card to travel for visa-free travel within the EU.