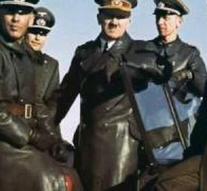 - An unannounced concert by German neo-Nazis has unpleasantly surprised the Swiss. Justice examines whether the right-wing extremist lyrics which sat in Unterwasser, in the region of St. Gallen, were performed punishable.

The organization had permission for a performance by talented Swiss bands and eight hundred visitors. That eventually were five thousand including the German neo-Nazi rock Stahlgewitter, Frontal Kraft and Exzess on stage. This controversial German groups would play somewhere in southern Germany, but traveled from the venue in Ulm unexpectedly to Switzerland with their rail cars and buses full of fans.

The police decided not to intervene because there were no problems and she did not want to cause too. The concert turned out well organized, from the parking of many vehicles to clean up the trash afterwards.