Home / World / This is going to teach Bill Cosby in prison 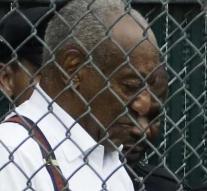 - Bill Cosby started his life in prison and will from now on be thoroughly evaluated to determine how extensive his treatment will be as a sex offender. That is based on the question of how dangerous he is, reports TMZ.

According to the site, Cosby is going to follow a treatment called Responsible Life: A program for sex offenders. There are seven phases, including for example behavioral techniques, sympathy with victims, sexual education and relapse prevention.

According to the Pennsylvania Department of Corrections, a government organization responsible for programs in prison that are supposed to help prisoners return to society, the fallen comedian will first undergo an evaluation to determine the risk category in which it falls and which treatment is appropriate.

Last Tuesday Cosby was sentenced to a punishment of at least three and a maximum of ten years. Women who had accused him were present in the room when pronouncing the verdict. That did not stop Cosby from making jokes with his team immediately after hearing the verdict.