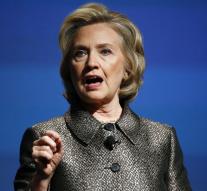 - The US-led air strikes on Islamic state in Syria and Iraq must intensify. There should be some ground forces to come to pass through IS occupied area to reclaim. This is suggested by Hillary Clinton, former US Secretary of State and the leading Democratic candidate for president.

Whether there are American ground troops to be sent to the area, showed Clinton in the middle. However, she finds that the bulk of the troops should come from the region itself.

Security services must collect much more data, helped by people who speak Arabic, said Clinton. She also advocated for no- flyzones over Syria and safe areas for people fleeing violence in IS area. " Our goal is not controlling or deterring IS. We must defeat them and destroy ", Clinton said.