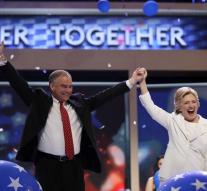 philadelphia - Hillary Clinton (68) Thursday evening (local time) in Philadelphia accepted her nomination as the Democratic presidential candidate. In her speech at the convention, Clinton said her main goal as president will be to create more good jobs with rising wages,, ''.

She promised in the first hundred days of her presidency to work with Republicans to achieve,, the largest investment in new, well-paying jobs since the Second World War. '

In addition, Clinton accused Republican presidential candidate Donald Trump that he sows division and fear. Fear of the future and fear of one another. The best answer gave Democratic President Roosevelt long ago, in real turbulent times, Clinton said, and quoted him:,, The only thing we have to fear, is fear itself. ''


They accused Trump are statements about international security:,, Trump says he knows more of IS than the generals. No, Donald, that's not true. '' Clinton imagined a hothead as he would deal with a crisis situation.,, A man who can lure you out of the tent with a tweet, you should not entrust our nukes! ''

The presidential candidate called for cooperation and mentioned the upcoming elections, where it has a chance to become the first female president of America,, a moment of reckoning. '

,, We are not afraid, but grow by the challenge. We do not build walls, but a strong economy where everyone has a job opportunity. Where immigrants who help build our economy are entitled to citizenship. ''


Clinton thanked President Obama, America,, made stronger '' and her rival candidate Bernie Sanders.,, You put high on the agenda of economic and social issues. Your struggle is our struggle! '' Clinton told him.

She also took on human rights for all, including lesbian, gay, bisexual and transgender (LGBT). Earlier in the evening transgender Sarah McBride broke a lance for the rights of LGBT. It was the first time that a transgender spoke at the convention.