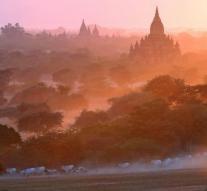 rangoon - One of the most popular tourist attractions in the temple plain of Bagan in Myanmar will soon be banned. As of March 1, it is no longer allowed to climb the centuries-old buildings, the Ministry of Culture announced Tuesday.

The reason was apparently a video of a business event, which was danced and sung to a pagoda, which aroused great indignation in social media. The field with more than 3000 temples and pagodas is considered one of the most important ancient structures in Southeast Asia. The oldest buildings date from the eleventh century.

The junta of the former dictatorship left in the nineties many buildings patch up with cement and stones. Historians complain that all rules for an authentic restoration thereby be violated.

The tourism industry now criticizes the prohibition to climb even on the buildings. Watching the sunset from a terrace on a temple is one of the highlights of each Bagan row. supplant the regular evening hundreds of tourists on the narrow stairs temple. Bagan The number of visitors has doubled since the end of the military junta in 2011 to 250 000 per year.