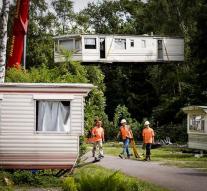 rijsbergen - The municipality of Zundert wants to vacate the last of a total of eleven fields of camping Fort Oranje in Rijsbergen on December 6th. The municipality announced it to the remaining residents on Tuesday. Exceptions may remain.

On July 31, a start was made with the evacuation of the Brabant problem campaigning. The first field was then emptied. Last week the second field was cleared. Until 6 December, the remaining nine fields will be replaced.

The recreants must leave by September 15th. Permanent residents must be notified at the latest on the date that their field is on the nomination, as described in a letter to residents (see below). They should be looking for an alternative.

The situation is different only for people with a care indication and a limited number of property owners. The first group gets help, and the second group is called 'a separate route'. 'But the goal is to empty the camp as much as possible in December,' said a municipal councilor in an explanation.

A resident who does not want to be named by name tells The Telegraph that the refurbishment does not go smoothly. Some residents who do voluntary work in the vicinity have been given a promise of 'urgency', but have not heard anything after a month.

As a consequence, the search for a new accommodation is preliminary. 'Things are promised, but they are not fulfilled. '

Fort Orange received a lot of attention as a problem campaigning through a series on television channel SBS. The municipality took over the management of the campsite in June after announcing owner Cees Engel's closure. Zundert wants to clean the campsite because there would be a lot of crime. The municipality also finds that many residents are in a 'terrible situation'.

Fort Orange lived an estimated 940 people. At the moment there are about eight hundred, according to a spokeswoman.