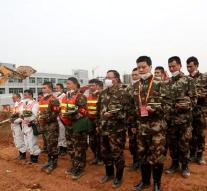 shenzhen - The former leader of the state urban development department, according to Chinese media called Xu Yuan'an would have jumped from a building after the authorities opened an investigation into him.

The government had the perpetrators of the disaster, where last Sunday a big wave of mud and debris engulfed 33 buildings, 'severe penalties' in prospect.

Twelve other suspects have been arrested. Early signs indicate that there has long been illegally dumped on an ever increasing waste despite several signs that the situation was perilous.

By continuing to turn a blind eye to companies that illegally dumped their garbage on the mountain, the trustees would have been imputed money.
The company that the (illegal) dirt dump took on its behalf, would have ignored a ban on its activities. That ban was issued by the local government because of security risks.

Rescue workers are on the scene of the accident, the Guangming new district that lies on the banks of the fast-growing metropolis, so far only a few salvaged remains. About seventy people were still missing Monday. The chance that they are still alive is nil.
That executives in China committed suicide after a fatal error is not uncommon. Last week was also the owner of a mine in Shandong province which had collapsed shortly before, which caused several deaths, an end to his life. The man helped the emergency services with their work when he suddenly jumped into a well and drowned.