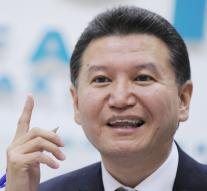 - The president of the International Chess Federation, Kirsan Ilyumzhinov, is since Wednesday on the US sanctions list of individuals and companies regarding Syria. Along with three other individuals and six companies from Russia, Syria and Cyprus are against him introduced restrictions because of " assisting material and act for or on behalf of the Government of Syria and the Central Bank of Syria." Reported that the US Treasury Department said in a statement, according to US media.

According to the statement, the former president of the Russian autonomous republic of Kalmykia is linked to financial transactions with companies of another person who was already on the list, the Syrian businessman Mudalal Khuri. The Russian Financial Alliance Bank, which is co- owned by Ilyumzhinov and Khuri was also put on the blacklist by Washington.