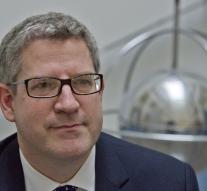 london - The head of Britain's domestic security service MI5, Andrew Parker, fearing a massive terrorist attack by Islamic State (IS). He believes the threat of terrorism is greater than ever before in its 32- year career with the service. Parker said this in a speech on terrorism, SkyNews reported Thursday.

Parker said that this year alone six conspiracies to sow terror, have been discovered. The threat does not decrease because " certainly there are 750 British extremists went to Syria and IS plant there attacks to mass casualties " in Great Britain.

Parker calls the three-dimensional threat : the threat of terrorism in their own country, overseas threat against UK interests and threats over the Internet. IS uses all modern means of communication to spread his message of hate, Parker said.