Home / World / Chaos on the track through forest fire Marseille 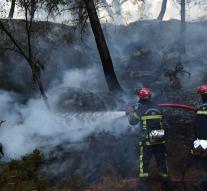 marseille - A fireside east of Marseille has led to a chaos in train traffic throughout the French region.

About 2300 travelers had to spend the night on trains and at stations in Marseille, Nice and Toulon, a spokesman for SNCF railway company reported Sunday.

In total, about 4000 passengers were hit by falling trains. In the region, many tourists also stay in the holiday season. Due to the forest fire, the railway line between Marseille and the coastal town of Cassis was impaired on Saturday evening. Thus, about ten TGV high-speed trains had to remain stationary.

The transport company had abandoned replacement bus services because the roads in the region also prevented the fire.