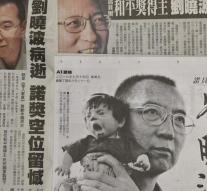 oslo - The chairman of the Norwegian Nobel Committee could not get a visa to attend the funeral of Chinese dissident Liu Xiaobo. The Chinese Consulate in Oslo would have refused to provide the papers.

'I was told that my visa application was not properly filled out. I had no invitation from the person I wanted to visit, 'said Berit Reiss-Andersen, who criticized the Chinese authorities on Thursday after the death of Liu.

According to Reiss-Andersen, the consular staff members did not tamper with. 'When I told them I was going to a funeral and that the person was dead, I was told I had to try a relative. 'They then said that Liu's wife, who has a house arrest, is in' isolation '.

Liu, the Chinese winner of the Nobel Peace Prize, died in China on Thursday. He has been suffering from liver cancer for quite some time. Reiss-Andersen criticized the fact that Liu was not transferred to prison in a timely manner to save his life.