Home / World / Chain sawmaniak caught thanks to a pizza baker 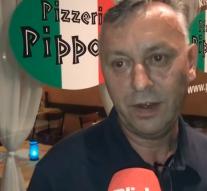 zurich - Not a Swiss police force, but the pizzeria's executioner has made it possible for the fugitive chain sawmaniac to be detained in the vicinity of Zurich on Tuesday night. Liman Kabashi recognized the 51-year-old Franz Wrousis immediately as he passed his case. The heroic pizza baker took the pursuit and alerted the police.

The pizza baker, Pizzeria Pipponi's outbuilder in the Swiss resort of Thalwil, saw Wrousis walking past his restaurant at half past six, reports the Swiss newspaper Blick. 'He came from the station direction. I recognized his face from the tracking photos. He had a bag and walked in the direction of the Migros supermarket. Without hesitation I decided to follow him. I wanted to make sure he was before I called the police. '

According to Kabashi, the fifties made a 'dreamy impression'. 'He looked in himself. 'When the horecaman was sure of his case, he alerted the police. It broke out massively, after which the man could eventually be arrested. The manhunt that kept the country day and a half in his grasp, came with the arrest order.

The Swiss police have been looking for man man and power in the last few days after injuring two people in the office of a health insurer in the town of Schaffhausen on Monday with a chain case. One of them suffered severe injuries but is not in danger of life. Why the man passed his deed is not known.