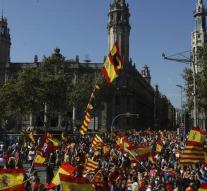 barcelona - Despite mass protests in Spanish cities, Catalonia continues simply on the path to independence. 'The declaration of independence is included in the referendum Act. We will follow the law, 'Puigdemont said Sunday in an interview with Catalan TV3, referring to the law adopted by the Barcelona Regional Parliament in early September.

Puigdemont is expected to announce independence in a speech to Parliament in Barcelona on Tuesday evening.