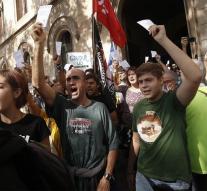 barcelona - A Catalan student movement has called for a strike at all universities in the region next Thursday and Friday. With their action, the students want to express their support for the independence referee that Catalonia wants to keep.

A spokesman for the university movement Universitats per la República said to the newspaper La Vanguardia that the Catalans are being prosecuted by Madrid and that is why it was decided to make a peaceful strike.

The Spanish judge has forbidden the independence report of the Catalans, but the governance of the region continues the polling process. The public consultation will take place on October 1.

In view of the referendum, the Dutch Ministry of Foreign Affairs has adapted the travel advice for Catalonia. 'In the period around October 1, events and protests will be held', according to the Ministry. 'Avoid events. Be careful. '