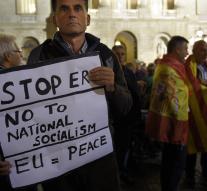 barcelona - The parliament of the Spanish region of Catalonia on Monday in majority voted for a resolution that the region will begin to separate from Spain. The two parties who submitted the statement, the nationalist Junts peel Sí (Together for Yes), the small leftist CUP (candidacy People's Unity) have a narrow majority. They want within one and a half year transition to an independent republic.

The text was not officially declared independence, but " a roadmap to independence ". Opponents of Junts peel Sí and the CUP accuse the separatists from enacting huge economic risks while receiving a majority of voters in September. Junts pel Sí got 39.5 percent and 8.2 percent CUP.