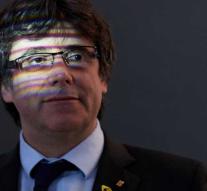 barcelona - The Catalan Parliament has approved a bill that should make it possible to choose a regional prime minister who is not personally present. As a result, former leader Carles Puigdemont (55) still comes into the picture to fulfill his old post again.

The regional parliament agreed with 70 to 65 votes in favor of the proposal. The Spanish government has already announced that it will go to the Constitutional Court. That ruled in January that Puigdemont can only be sworn in as a regional leader of Catalonia if he is physically present in parliament.

Puigdemont had fled from Catalonia in the aftermath of the illegal referendum on independence. The separatist leader is currently in Germany, where the judge has to decide whether he can be extradited to Spain. The Catalan parliament has not yet chosen a new prime minister. The politicians have until 22 May to form a regional government, otherwise new regional elections have to be held.