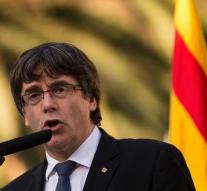 barcelona - Catalan leader Carles Puigdemont has still not made it clear whether he has declared the independence of Catalonia. The driver published a letter in a Monday to meet with Spanish Prime Minister Mariano Rajoy.

Puigdemont wrote to the Prime Minister to discuss the situation in Catalonia. The Catalan leader said that a dialogue should take place between Spain and Catalonia over the next two months.

Madrid has given Puigdemont time to 10.00 hours to clarify whether he wants to separate Catalonia from the rest of Spain. The government would then take the time until Thursday 19 October to analyze the answer.