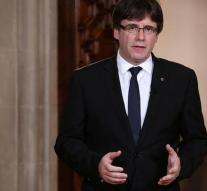 barcelona - Catalan leader Carles Puigdemont said Wednesday evening that he is in favor of mediation to find a way out of the crisis, but the Spanish government is not feeling anything for now.

'This moment requires mediation. We have received several offers over the past few hours and we expect more, 'Puigdemont said on television.

'They all know I'm ready to start a mediation process. I will repeat it as often as necessary: ​​dialogue and agreement are part of the political culture of our people. However, the government has not yet responded positively to these proposals, 'said the president of the Catalonia region.