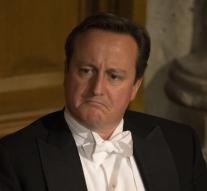 london - British Prime Minister David Cameron wants after the attacks in Paris invest heavily in special units of the army. For this military special forces to reinforce the anti-terror struggle in the next five years, two billion pounds (about 2.8 billion) additionally required. The money must benefit the new weapons, equipment, helicopters and drones, announced the prime minister in London.

Monday, Cameron said, he wants to earmark additional funds for security at airports and the number of people working in the intelligence and security services, with 1900 will screw up. Cameron thereby warned that attacks like in Paris also occur in Britain.