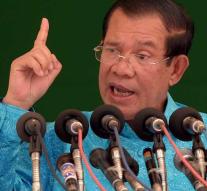 phnom penh - Cambodia was already a world record holder with 27 official holidays- the Netherlands has 11- but has continued to compete. The 15 million inhabitants of the kingdom in Southeast Asia are now also free on May 20th.

Prime Minister Hun Sen has declared that date by decree as 'national remembrance day'. The Cambodians are then considered to pause for a moment on the millions of victims who made the Khmer Rouge regime in the seventies.

The gesture of Sen, who has been leading the country with a strong hand since 1985, comes at a clever moment. There will be elections at the end of July. Although the result is certain, because according to many the opposition is mercilessly oppressed, an extra holiday can not harm the supporters.

And Cambodia did not fall short. King Norodom Sihamoni has little to tell but is very honored with his family. That must be celebrated. Of course everyone is free on his birthday, but also on the birthday of his mother, the death day of his father and on the day of his coronation. The population, 97 percent Buddhist, also enjoys several religious holidays and a number of other paid heyday.