Home / World / Call to Bouterse to step up 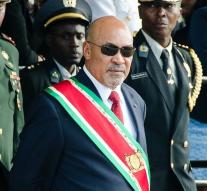 paramaribo - If Suriname really goes to heart, then President Desi Bouterse should step up. Betty Goede, chairman of the Organization for Justice and Peace (OGV), is a human rights organization that has been closely involved in the December murder process.

'We now have a president with a sentence of twenty years imprisonment. That's not really a nice picture outside, 'said Good Wednesday in response to the demand against the former army leader.

However, there is no expectation that Bouterse himself or his cabinet will now come up with a response, as evidenced by the reactions of people who followed the process. They also do not expect that this development will cause unrest or happiness for people to go up the streets. After all, it is only a claim from the prosecutor. Ultimately, it is about what the judgment of the degree of gray will be, according to the reactions.

However, there are positive sounds in Paramaribo about the way in which Auditor-Military Roy Elgin has made his speech. 'Good, but still daring. But that's how he's done, 'Hugo Essed, lawyer of the victims of the victims, said.

At the moment, it is not known when the war council will pronounce the punishment and when the prosecution will be completely completed. As a total of 24 suspects, the prosecutor still needs some time. For the time being, sessions are scheduled for next Friday and October 30th.

If the prosecutor has pronounced punishment for all suspects, then the lawyers of the suspects will hold their plea. After that, the ward council will decide on penalties, whereupon the suspects can come back to appeal. Suriname is not yet ready for this case.