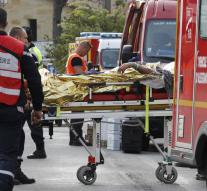 bordeaux - The driver of the bus who flew Friday in the French Puisseguin after a collision with a lorry on fire, was unharmed. He suffered only minor injuries. That the Mayor of Puisseguin said Friday.

After the blow of the collision with the truck, the bus driver still had the presence of mind to open the door of his vehicle. That presented in each case eight passengers the opportunity to leave the bus and escape the flames. The bus flew immediately after the collision on fire.

It is certain that the driver of the truck, which the mayor lost control of his control, has come to life.