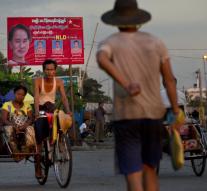 yangon - For decades it was hermetically sealed off from the outside world, but the former Burma has opened the doors in recent years put wide open. Throngs of tourists, including many Dutch, and also flow businesses to the Southeast Asian country. The powerful army deployed all tentative steps on the path of democracy, was rewarded last year with a visit by US President Obama, but remains firmly seated on the plush.

An NLD supporter with the portraits of Aung San Suu Kyi and her father.

The results of the elections will not change much. The army continues to keep in control and Aung San Suu Kyi can not be president according to the constitution. To change that constitution is a necessary majority of at least three-quarters of the delegates. The tourism industry rooting mean that voting proceeds smoothly and that the democratic process continues. A combination of the two is good for the reputation of the country and the influx of tourists. This year the country expects a total of 4.5 million foreign visitors, compared to 3 million last year.