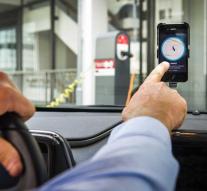 amsterdam - The cheaper version of the taxi service Uber is also available from Thursday in Rotterdam. The olinetaxidienst introduced the new service, UberX in September in Amsterdam.

The rides are cheaper because fewer drivers in luxury cars such as a Toyota Prius and Volkswagen Passat. The drivers have all the necessary permits. This offer is different from the much-criticized UberPop, where amateurs are used as drivers. UberX is an extension of the range of Uber Black, which only drivers with a luxury car qualify.

" UberX is a great success in Amsterdam for both drivers and passengers ", said general manager Niek van Leeuwen Uber Benelux. " It's time to let Rotterdam also know now with our new budget option. "