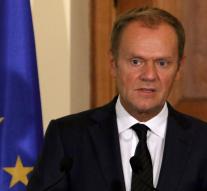 brussels - The political leaders of the 28 countries of the European Union Thursday come back to Brussels for consultations. Migration is the main subject of their summit. Europe must become less attractive to migrants reception in the region should be better and asylum seekers who have no right to asylum must return to their country of origin.

The summit is gripped by pressure groups to include the international free trade agreement with the United States to protest in the Belgian capital. They also demonstrate against the austerity in the EU.

Originally there were two days set aside for the meeting of EU leaders , but President k thinks in one day to finalize the topics. The summit will begin at 16:00 pm.