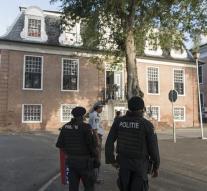 paramaribo - Justice in Suriname, two Surinamese Dutch are also suspected of committing an attack on a representative of a friendly nation. This is evidenced by a confidential document from the Surinamese Public Prosecutor's Office (OM) that the ANP has seen on Tuesday. The two brothers have been detained for more than two weeks on suspicion of participating in a terrorist organization.

The Surinamese Ministry of Justice and Police recently stated that the suspects would not have been a danger to a mission or embassy in Suriname.

The two suspects arrested on July 23 are brothers who work in Paramaribo's butcher's butchery. Only Tuesday, men's lawyers got permission to talk with their clients. The past few weeks, that was not because the OM was afraid of 'proof of confusion'.

Last week Wednesday, the Court of Justice called on a lawyer's request to lift the restrictions.

There were many rumors in Suriname that there would be a link with another country. The families and neighbors of the suspects have seen and heard English speaking white men in the arrest.

The Surinam authorities have not provided new information since. Even on questions from Surinamese MPs, the acting minister of justice and police, Ferdinand Welfare, refused to answer on Tuesday.