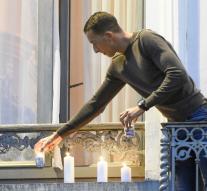 brussels - Mohamed Abdeslam, the brother of two of the perpetrators of the attacks in Paris, Wednesday attended the memorial service in Molenbeek for the victims of the terror wave. Abdeslam burning on the balcony of his apartment some candles for the dead.

Mohamed Abdeslam is the brother of Ibrahim Abdeslam (31), who blew himself up in front of the Comptoir Cafe Voltaire in Paris, Abdeslam Salah (26), which still is wanted for his part in the attacks. Salah would have acted partly as a driver of the terrorists who inflicted a massacre at the Bataclan theater.

Mohamed Abdeslam was also arrested after the attacks and interrogated, but according to his lawyer shall cease to be suspect.

In commemorating in Molenbeek were thousands of people there. They gathered on the town square. The Brussels municipality entered the last days in the news as a hotbed of jihadists. Those present made ​​it clear that they wanted to counter this negative image.

At the meeting was also the French ambassador present. There were quite taken some security measures. There was an impressive amount of agents on the bone and all visitors are searched. Those present held a minute's silence and burning candles.