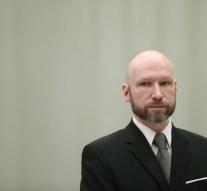 oslo - Norwegian massacre Anders Behring Breivik has officially changed his name. The man who is 21 years in prison for 77 people killed in 2011 is now living as Fjotolf Hansen, reporting Norwegian media on Friday.

Breivik's lawyer Øystein Storrvik confirmed against the newspaper Verdens Gang the name change, which was announced in the Norwegian National Register. Storrvik did not know when and why Breivik applied for the name change. 'I realize he has done it. '

The 38-year-old prisoner committed two attacks in Oslo in July 2011 and on the nearby island of Utøya, bringing a total of 77 people alive. He was sentenced to 21 years in prison for multiple killings and terrorism, with the possibility of renewal if he after that period is still a danger to society.

Breivik's lawyer announced Thursday to go to the European Court of Human Rights in Strasbourg to fight the circumstances under which his client is arrested. He used to blow with the Norwegian judge. Breivik resides in almost complete isolation in a cell that counts three spaces. He has no dealings with fellow prisoners.