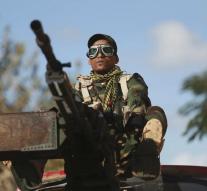 cairo - The extremist Muslim brigade Ansar al-Sharia in Libya indicated on Saturday that the group is lifting itself. The reason is that they have suffered major losses, according to the statement of al-Qaeda-related militia. For example, the leaders killed and lost many fighters.

Ansar al-Sharia formed in 2011 in the eastern Libyan city of Benghazi to support the fight against dictator Muammar Kaddafi. Founder Mohamed al-Zahawi died in early 2015 of injuries he sustained during fights.

According to the US, the group is responsible for the attack on the American consulate in Benghazi in 2012. This led to the American ambassador's death. Recently, Ansar al-Sharia has been fighting with General Khalifa Haftar, who has a lot of support in eastern Libya.